Anime and live taiko drumming. Once you’ve heard the idea it seems like something that should be happening all the time – a perfect combination, like peanut butter and jam or chocolate and anything.

We invited one of our performing members, Dr Catherine Strong, senior lecturer at RMIT University, to write a few words about a fairly special event that took place in Melbourne last week – arguably the coolest gig to hit our taiko community in recent years.

On Thursday January 12th, a group of 20 Rindo members were lucky enough to have tickets to see Akira at the Astor Theatre in St Kilda. Part of the Hear My Eyes series, where musicians are given a chance to create a new score to a movie and perform it live, Akira was being accompanied by a soundtrack created by Melbourne electronic/drone artists Black Cab and Wadaiko Rindo’s Toshi Sakamoto. The session sold out within a week of going on sale, so the crowd was keen and excited to see what was on offer.

The Astor Theatre was a perfect location for this event. The feel of the old cinema, with its original art deco decorations, makes everything seem a bit more special and significant. The stage in front of the screen meant (at least for those of us in the lower section) the musicians were visible just under the movie so we could see what they’re up to. The Rindo group ensured that the biggest cheer as the musicians were introduced and took their places on stage was for Toshi.

I thought I had seen Akira a long time ago; turns out that nope, I had not. It’s not a movie you would forget once you’ve seen it. For the uninitiated, the 1988 film is considered to be one of the classics of the anime genre. Set in 2019 in Neo-Tokyo built on the ruins of the original Tokyo after it was destroyed in World War III in 1988, it follows teenage members of a bike gang as they are accidentally drawn into a world of military secrets, rebellions and creepy scientific experiments. It deals with themes that often appear in anime – the dangers of technology and science that aren’t fully understood, for example – in intriguing ways, and includes brilliant characters. The three old children with psychic powers were particularly fascinating, grotesque but compelling at the same time.

This is fantastic material to work with, and given the obvious intersections between the type of work Black Cab do and the anime genre, the new score we heard enhanced what we were seeing in a variety of ways. Even though I wanted to watch Toshi at work, the way the music was so well integrated with the movie, and worked in particular to augment the action sequences, meant you would get so caught up in what was happening that nothing could drag your attention away. The taiko drums were an important part of this immersion – having the drums physically in the same space as you instead of just on a recording created different vibrations and, in combination with what Black Cab were doing, a wall of sound that so well matched the apocalyptic scenes on screen.

At the same time, the musicians knew when to pull back and use silence. I don’t know the original score, but it would be hard to imagine it would suit the movie more than this performance did.

The crowd response at the end of the movie was hugely enthusiastic – the fact that everyone stayed through the credits to make sure they heard every note of the new score showed how well-received it was. The verdict of the Rindo contingent was that including live taiko as part of movie soundtracks should be standard practice from now on. At the very least, we hope to see other events like this, featuring taiko in unexpected places, happening soon.

_________________
Catherine Strong spends most of her week camping out at the taiko dojo taking as many classes as possible. She occasionally finds time to lecture in the Music Industry programme at RMIT University. 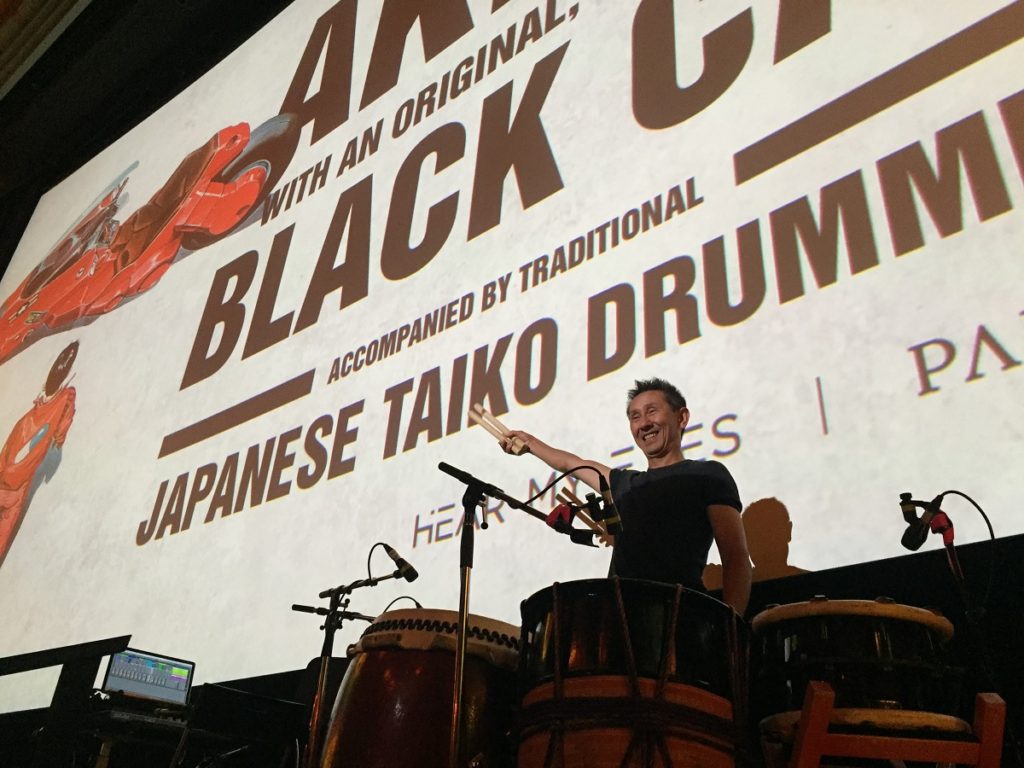 Toshi Sakamoto on stage at the Astor Theatre, for the screening of AKIRA. Live original score by Black Cab.
Photo: Catherine Strong