Wadaiko Rindo students enjoy a sense of community while they exercise their bodies and minds in weekly classes.
photograph: Mia-Alexandra Sky

People of all backgrounds, cultures and ages come together and enjoy playing taiko with Wadaiko Rindo. Motivation for joining also varies enormously. We have students who joined after enjoying a Wadaiko Rindo public appearance or concert, others participated in a school demonstration years earlier when they were in primary school, and never lost the bug for the beat. We also have students who join to keep their brains active, since taiko provides for constant neural retraining and focus. Others, still, find comfort in the meditative nature of drumming, or enjoy the physicality of the training.

The benefits of regularly attending group music classes are well documented. Our taiko students stand to gain personally and academically, through an increase in motivation and self-confidence, coordination, cultural awareness and team work. Regular performances are held by the students in local music festivals and events to increase their range of skills, their confidence and to give them the opportunity to experience the buzz of public appearances. There is also an annual concert in December that showcases the year’s work, and gives family and friends the chance to enjoy the rhythms that students have been sweating over!

Our students can also participate in Wadaiko Rindo’s biennial Taiko Camp, a musical weekend held on the outskirts of Melbourne at a mountain retreat, with drumming, Japanese flute and dance workshops, amongst other fun activities that bring the school together and create bonds unlike anything else in Melbourne’s taiko calendar.

Every alternate year, we host the Wadaiko Festival that invites taiko players from across Australia and overseas to join in a knowledge-sharing week, culminating in a Festival concert that highlights some newly acquired techniques and showcases the guests and participating groups.

Wadaiko Rindo taiko classes started in 1996, initially starting out as a JAPEP taiko class with a handful of students, and today there are over a dozen weekly classes with over 130 students actively participating in each term.

The class and rehearsal venue is the hall adjacent to St Philips Anglican Church, located close to the city. The Eastern Freeway is nearby, and the hall is easily accessible by public transport. 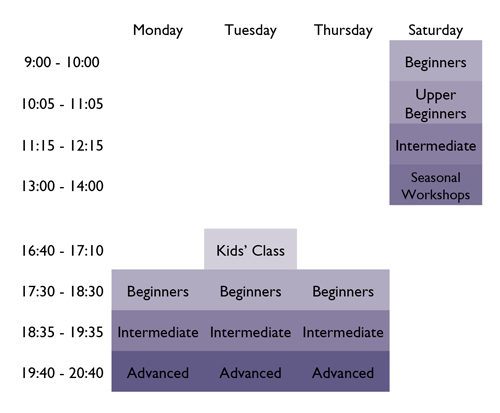